Irish Terrier as the name denotes, is a representative of the Emerald Isle, and it is well known that Irishmen, of what ever rank they may be, whether gentlemen, farmers, or cottiers, have always been noted sportsmen, and there is no doubt whatever that a sporting terrier has been kept in Ireland for many generations, as they are referred to in old Irish manuscripts. They are described by an old Irish writer as being the poor man’s sentinel, the farmer’s friend, and the gentleman’s favourite.

These dogs were originally bred not so much for their looks as for their working qualities and gameness, the Irish Terrier being by instinct a thorough vermin killer. They were formally of all types and all colours, black and tan, grey and brindle, wheaten of all shades, and red being the predominant colours. Colour or size evidently did not matter if they were hardy and game.

There was a large strain kept in Co. Cork mostly wheaten’s, and there was also a breed found around Ballymena and the North of Ireland which were more like the modern show Irish Terrier, being racy in type, with long punishing jaws, wheaten in colour, but mostly soft and open in coat.

For a few years prior to 1879 Irish Terriers had been exhibited occasionally at such shows as the Kennel Club, Birmingham, Dublin, Belfast, and a few others, generally having one class with the sexes mixed. At this time it was the fashion to crop the ears of all Irish Terriers.

The first Irish Terrier Club was formed in 1879 for the purpose of the protection and advancement of the breed, at its first general meeting in 1880 there was a regular discussion on the cropping of ears question, which latter resulted in the Irish Terrier Club, being the pioneers of the movement to put an end altogether to the cropping of the ears of all breeds of dog for exhibition. 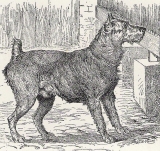 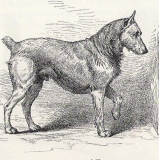 It is not surprising that the Irish Terrier has a record as a war dog and a combat messenger. Lt. Col. E. H. Richardson of the British War Dog School, writing about Irish Terriers in World War 1, is quoted as follows: “I can say with decided emphasis that the Irish Terriers of the service more than did their part. Many a soldier is alive today through the effort of one of these very terriers. My opinion of this breed is indeed a high one. They are highly sensitive, spirited dogs of fine metal, and those of us who respect and admire the finer qualities of mind will find them amply reflected in these terriers. They are extraordinarily intelligent, faithful and honest, and a man who has one of them as a companion will never lack a true friend”.

After these early references to Irish Terriers they became show dogs and pedigrees were kept. However it was quite common and acceptable for bitches to whelp black and tan pups in their litters even after they had been predominately red for some generations. Even now some pups are born with black shadings and after a few weeks black down appears, this generally lifts by 12 weeks of age.  To go back to the early days it is interesting to note that at Dublin there was to be a first show of Irish Terriers. Therefore it was interest that the sceptics of which there were a great number, mostly Fox Terrier breeders waited to see this first showing of what was said to be an ancient and pristine pure breed. Irish Terrier supporters wanted to make sure of a representative gathering on which they could rely, and stated that no dog would be allowed in the show unless it had a pedigree.

Then came the news much to everybody’s surprise that a considerable number of pedigree Irish Terriers had been entered! The show day arrived as did the judge who was confronted with dogs of all sizes and colours, types and coats. He did not know what to do, becoming utterly confused! To make matters worse there had been correspondence in the press as to what should be the best type of Irish Terrier.  Needless to say this caused much heated argument between the owners of various types as to who owned the pure breed. It was to settle this vexed question, the judge said to be a long established breeder of these dogs had been chosen as the authority best suited to decide this matter once and for all. He sorted out the prizes best he could giving some to one kind and some to another. Whilst such confusion ushered in the Irish Terrier there is no question that at that time at least one typical specimen as we know it today – was existing, Mr. Jamieson’s “Sport”.  Indeed it is certain that a number of such dogs were living, but for unexplained reasons were not exhibited at the show. Mr. Jamieson played a significant part in promoting the breed buying, breeding and showing. So that by the year 1875 he had won altogether 54 prizes – a total of 47 more than the next exhibitor!

Times were difficult for the breed, pedigree and breeding meant little, all that mattered was that the dog should have the required appearance. There were so many dogs of other types and colours than red that Sport was not always looked upon with favour – judges often refusing to recognise it as true to the Irish Breed. The first list of Irish Terriers entirely distinct from all other Breeds appears in the Kennel Club Stud Book for 1876, some of the entries are stated to be Red, and include “Sport”.

In 1879 the Foundation Stone of the present Show Terrier was laid, this was to be a momentous year in the whole history of the Breed, also in this year the Irish Terrier Club was formed, its aims being the protection and advancement of the Breed. In this year Champion Erin made her appearance at the Alexandra Palace, whilst Killiney Boy came out first at Belfast. The Judge who had the honor of spotting him and giving him first prize was Mr. J. Pim. Afterwards he did a good deal of winning, but it was as a sire that he shone especially when mated with Ch Erin. In her first litter she produced Champions Playboy Pagan H and Poppy who was a red. It would be difficult to find a modem pedigree that does not go back to one of the famous unions of Killiney Boy and Ch Em known as the Father and Mother of the Breed. It is recorded that Poppy produced red puppies and possibly it is due to this that the decision was taken to make Irish Terriers a Breed of red dogs only. Whether this is so “Poppy’s” puppies certainly started the colour question again, and it was finally decided that an Irish Terrier must be a whole red although the shade may vary from the colour of wheat to that of a new brick.

Fifteen years later black and tans had been entirely bred out. Feelings were running strongly as to what was or was not the correct type, that twenty-four leading Breeders signed a list of Breed characteristics as correct, and in order to show their authority added their qualifications such as Breeder and Exhibitor. All lived in Ireland. Their efforts ended the argument and from then on there was no longer and getting away from what was desirable in the TRUE IRISH TERRIER.

In 1885 Mr. Bamett brought out Bachelor a rather dark colored Terrier with small drop ears. It is recorded that even Wire Haired Fox Terrier men had admired this dog and suggested that he could be used to improve the wire coats of their dogs!! It is interesting to note that the Irish did not believe in ear cropping and were hotly against it at the first Terrier Show in 1886 held at Westminster. The Irish Terriers were divided into two classes cropped and uncropped. In fact two years later The Irish Terrier Club pioneered the abolishment of ear cropping. This was subsequently made a rule by the Kennel Club that all dogs must be uncropped for exhibition. It is said that the next important year seems to have been 1888 when Mr Wiener brought out his celebrated Terrier Ch Brickbat. Apparently this dog was markedly and distinctly ahead of his time and is interesting to note that his height at shoulder was 163/4ins. After Ch Brickbat came Ted Malone a dog very much like his Grand Sire full of quality and a typical Irishman who was said to be a little more on the leg than Brickbat and with ears on. About this time a dog made his appearance that took the whole “Irish” community by storm.. This was Bolton Wood Mixer. This dog was referred to as a dream - having a long clean head, well-balanced foreface, small eye and perfect ears. In front, shoulders, legs and feet he was perfection. His qualities were such that they had never been seen on any Irish Terrier before him. It is said that Judges appeared to loose sight of one fact that this dog was completely different in type and character to any Irish Terrier either of his own or previous decades. This then begged the question, could this be right? Either the dog was absolutely wrong in type or else he was right. It would appear that the general opinion was that this dog was correct as among those to award him prizes was Mr. Krehl a top authority on the Breed. In fact it was largely through the efforts of Mr. Krehl that the Breed gained popularity. His knowledge was such that he was invited to write an article about Irish Terriers in Cassell’s Book of the Dog from which he described the Breed “as a really well shaped and useful looking animal”, a true observation and one that should be taken into account when judging the Breed.

These were the great days of Irish Terrier History - then caine the period of the Great War during which a few Breeders kept the Breed together, In the year 1920 there were 34 sets of Challenge Certificates on offer for the Breed which shows just how numerically strong the Breed was - in fact it is interesting to note that 20 of these were won by different dogs - that is quite amazing, The Breed continued to advance with many top Kennels producing typical Irish Terriers - The list of Champions in Jowett’s book ‘The Irish Terrier’ speaks for itself .

Many of these can be seen in Dog World and Our Dogs Annuals spanning from the early 19th century to the 1960’s. Sadly as many of these great names disappeared, only a few came along to replace them which brings us up to the present day, we need new blood, but type must not be lost Here Judges play an important part in shaping a breed. It is vital to try to find winners from exhibits true to the Breed. Not easy in a numerically small Breed.

Once you get to know an Irish Terrier well enough to get acquainted with his personality, to recognize the depth of his love, to behold his proud almost swaggering carriage, his catlike grace of movement and blinding speed and coordination of muscle, and his magnificent courage and heart, and to see his unnerving intelligence displayed again and again, you will be convinced that the Irish Terrier is one of the most magnificent of God's creations in the dog family.

From "Long-Legged Irishman,
Biography of a Terrier,"
by Byron N. Martin

A chestnut coat
So rich, so red
Two eyes as black as night
A stature - sturdy, strong and hard
He'll impress with all his might

A friend for life
That's what he'll be
So loyal and oh so proud
This dog could never fail you
He's a treasure in a crowd.